Dianne Lob, the immediate past chair of HIAS, was nominated today to become Chair of the Conference of Presidents of Major American Jewish Organizations, effective June 1, 2020.  The nomination will be submitted to the full Conference membership for a vote on April 28, 2020.

The daughter of German Jewish refugees, Ms. Lob served as the first female Board Chair of HIAS from 2016 to 2019. In that role, she led HIAS through important strategic planning and communications processes, and a significant growth period for the organization amid the largest global refugee crisis since World War II.  She also guided the organization through the aftermath of the Pittsburgh synagogue shooting, an antisemitic attack linked by the killer to HIAS’ work.  Additionally, Ms. Lob has served on committees of UJA/Federation of New York, including current membership on the Community Resources task force.  She is a member of New York City’s Central Synagogue.

Ms. Lob is Head of Global Business Development for AllianceBernstein (AB), a leading global investment management firm, where she focuses on the global sales strategy for AB’s broad equity, fixed income and multi-asset services, as well as new product development, thought leadership and the creation of marketing materials. Ms. Lob coordinates globally with the Institutional, Retail and Private Client teams.  She previously was AB’s Head of Equity Business Development, President and a Director of the Sanford C. Bernstein Mutual Fund Board, and Chair of Bernstein Global Wealth Management’s Private Client Investment Policy Group.  Ms. Lob is a founder of AB’s women’s initiatives including the Women’s Leadership Council.  She earned a BA in economics from Tufts University and an MBA from the University of Chicago.

“The Nominating Committee unanimously recognized the integrity and thoroughness of the nominating process that led to this recommendation,” said Nominating Committee Chair Stephen M. Greenberg and outgoing Chair Arthur Stark.  “We have full confidence that Dianne Lob will serve the Conference and the American Jewish community with dedication and distinction.”

“During this unique time in Jewish life, as we all struggle with the uncertainty of the COVID-19 crisis, Dianne Lob brings a unique and valued outlook from her leadership position as the Chair of one of the most storied organizations in American Jewish life and from her senior positions in the financial industry,” said CEO William C. Daroff and Vice Chair Malcolm Hoenlein. “The role of the Conference will be even more crucial, as we face many increasingly complex challenges at home and abroad. Dianne follows the impressive and impactful tenure of Arthur Stark, who will continue to be involved and provide invaluable guidance and counsel, along with other past Chairs, the Executive Council, and leaders of our member organizations.” 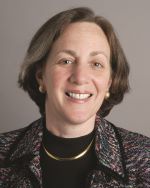